The New Shape of World Christianity 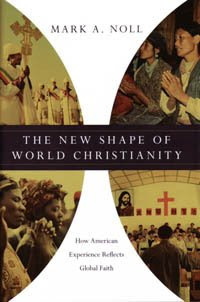 Challies shares an interesting book review and summary from The New Shape of World Christianity by Mark Noll. The article begins, "Those of us who are Western Christians continue to hear reports that the church is migrating to the south and to the east--that as our nations increasingly turn their collective backs on God, God begins fresh work in other parts of the world. Says Mark Noll in his new book The New Shape of World Christianity, "It is as if the globe had been turned upside down and sideways. A few short decades ago, Christian believers were concentrated in the global north and west, but now a rapidly swelling majority lives in the global south and east...." Find the rest of the review here.
Posted by Chad Selph's Blog at 10:48 AM No comments:

A Tech Bill of Rights

Interesting article from Fortune Magazine:
"Where is the line when it comes to appropriate cell phone behavior? Is it ok to talk in a crowded restaurant? An elevator? How about interrupting an actual, you know, face-to-face conversation to answer a call? Then there's non-voice communications: Is it acceptable to walk while emailing, bumping into people on the sidewalk en route? Texting at the urinal: It's potentially messy and definitely gross, but is it acceptable? Is it rude to keep reaching into your pocket whenever your BlackBerry buzzes?" There are some interesting stats here about how many of us feel others are being rude with their cell phone behavior but how few of us think we are being rude ourselves...
Posted by Chad Selph's Blog at 9:51 AM No comments:

Sunday I shared an illustration for Colossians 1:17. It describes Jesus as the the One who "holds all things together." The illustration came from Louie Giglio. He is an excellent gospel communicator that never fails to bless my heart. There is a portion of one of his message on YouTube that has gotten a lot of play. It relates to this point from Colossians. It is the amazing application point regarding LAMININ.

Here is a simple definition: “Laminins are a family of proteins that are an integral part of the structural scaffolding of basement membranes in almost every animal tissue.” You see....laminins are what hold us together....LITERALLY. They are cell adhesion molecules. They are what holds one cell of our bodies to the next cell. Without them, we would literally fall apart.

This isn’t evidence the Bible is true or something like that but it makes a good point. What holds our bodies together is laminin. The Bible in Colossians says that in Jesus “all things hold together.” This YouTube Video has Louie sharing the story.
Posted by Chad Selph's Blog at 9:49 AM No comments:

Mark Beeson, pastor of great Granger Community Church in Granger Indiana, wrote a brief, inspirational article on "Ambidextrous Worship." It is a great reminder of the wholeness of biblical worship. It's much more than singing songs. It's pleasing the Lord God.
Posted by Chad Selph's Blog at 8:32 AM No comments:

Sunday we talked about the supremacy of Christ from Colossians 1:15-23. It is a powerful set of verses describing who Jesus really is. As a part of our discussion, I mentioned that there are religious groups today (as there were when Paul wrote Colossians) who dispute the core teaching in the Bible regarding who Jesus is. When examining any group, it is important to determine what they believe and teaching regarding the person and work of Jesus Christ.
I mentioned the group known as Jehovah's Witnesses as one such group. While they are usually very nice people, they deny that Jesus is God. If they come to your door, they will often take you to Colossians 1:15 as a part of their argument. In that verse, Jesus is referred to as "the first-born over all creation."

David Dykes, pastor of Green Acres Baptist Church in Tyler, Texas talked about this in a very clear and simple way. Let me share how he addresses this issue:

"At the time Paul wrote this letter, there were heretics teaching that Jesus was not God, but merely a super-human created being. Those kinds of heretics are still around today; and one group of them is called Jehovah’s Witnesses. There’s a good chance that at some time, you’ve had a couple of these friendly people knock on your door. They call themselves Christians, and they want to teach you the “real truth” about Jesus, and even give you a copy of their translation of the Bible. But they are heretics, because they do not believe Jesus is God.
I bring them up, because this verse, Colossians 1:15 is the main bullet they load into their false doctrine gun. They ask you get your Bible and turn to Colossians 1:15. Then they say something like, “See? It says doesn’t mean that Jesus IS God. It says He was the image of God.” Then they may show you a photograph of a person and ask, “Is that the person, or just an image of that person?” Then they have you read those words, “firstborn over all creation,” and then they say, “See, that proves Jesus can’t be God. It says he was the firstborn over all creation; that proves he was created and if he was created, then God created Him which means he can’t be God.” “Jesus was the image of God, just like we were created in the image of God, and he was a created man just like we are.” And a lot of scripturally ignorant church members say, “Hmmm, you may be right.”
Come on, church! All you have to do is read the next seven words and their false doctrine about Jesus crumbles like a house of cards. It says, “For by him all things were created.” No, the word “firstborn’ has nothing to do with act of being born–it’s all about position and privilege. The firstborn in a Jewish family received the inheritance. When Paul wrote that Jesus was the firstborn, he meant Jesus has the right to claim everything that belongs to the Father– even His deity! He is the firstborn OVER all creation. That means He’s the boss, the ruler, the king."
Posted by Chad Selph's Blog at 8:01 AM No comments:

"Death is Not Dying"

Rachel Barkey, whose message titled "Death is Not Dying" became a bit of an internet phenomenon, went home to her Lord on July 2, 2009 at 37 years of age. If you have not yet heard "Death is Not Dying," this is a good time to do so. The video link is a message Rachel shared, knowing she only had a few weeks to live, having fought cancer bravely for some time.
This description appears on her website:
Rachel's story is not unlike what thousands of women around the world have experienced. A diagnosis that changes a woman's life and inevitably takes from her what we consider to be most precious. After four and a half years of vigilantly fighting breast cancer, the 37 year old wife and mother of two was diagnosed with terminal cancer. But for Rachel the essence of life is found in her relationship with God through Jesus. And that's why Rachel is convinced that death is not dying.
Posted by Chad Selph's Blog at 11:04 AM No comments:

Today we continued our series of messages in Colossians. The conclusion was a prayer for God's blessings on America. Here are the things included in that prayer:

· God bless America with a conviction of our own sinfulness.

· God bless America with enough pain and difficulty to awaken our need for God.

· God bless America with a love for Jesus Christ and desire to be like Him in all things.

· God bless America with a compassionate heart for the spiritually lost, the financially challenged, the forgotten, forsaken, the last, the least, and the lonely.

· God bless America with a caring heart for the world…that is poor, uneducated, the hurting and helpless…diseased and downcast.

· God bless America with a love for the things that God cares about most rather than just what profits and benefits us.

· God bless America with a clear sense of stewardship of our many blessings and an openness to sharing our blessings rather than hoarding them.

· God bless America with a moral compass to know what is right and wrong before God and the personal integrity to do what is right.

· God bless America with another chance to be a nation where the cross is central, Christ is worshipped and the church is making a difference in our land and in our world.

· Dear God…not because we deserve it…not because we’ve earned it…but I pray that as our hearts as your people…called by your name…humble ourselves and pray and turn back fully toward you…in your grace…that you would heal our land…we ask as we join together today…may Christ be exalted in us.
Posted by Chad Selph's Blog at 3:53 PM No comments:

On a Fourth of July weekend, Mark Batterson, who pastors a church in Washington, D.C., offers a great perspective on the founding fathers of our nation.
Posted by Chad Selph's Blog at 3:47 PM No comments:

Church: Love It, Don't Leave It

This is a well-written article on the place of the church in our modern America. Kevin DeYoung and Ted Kluck are guest voices in the Washington Post, talking about the church. "Here's what Bono, Oprah, and the guru speakers on PBS won't tell you: Jesus believed in organized religion and he founded an institution. Of course, Jesus had no patience for religious hacks and self-righteous wannabes, but he was still Jewish. And as Jew, he read the Holy Book, worshiped in the synagogue, and kept Torah. He did not start a movement of latte-drinking disciples who excelled in spiritual conversations. He founded the church (Matt. 16:18) and commissioned the apostles to proclaim the good news that Israel's Messiah had come and the sins of the world could be forgiven through his death on the cross (Matt. 28:18-20; Acts 2:14-36)."
Posted by Chad Selph's Blog at 4:08 PM No comments:

Al Mohler shares an interesting article on the world's most famous living atheist - "News out of Great Britain indicates that Richard Dawkins, perhaps the world’s most famous living atheist, is setting up a summer camp intended to help children and teenagers adopt atheism. As The Times [London] reports: 'Give Richard Dawkins a child for a week’s summer camp and he will try to give you an atheist for life.'..."
Posted by Chad Selph's Blog at 12:41 PM No comments: