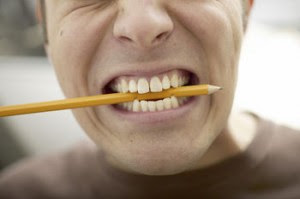 Sunday we will share in a sermon - "If There Is a God, Why Are There Atheists?" - as we continue in a series on Christian apologetics. Al Mohler writes regarding a response to "International Blasphemy Day" and the darkness it embraces.
Ready for a day to honor blasphemy? According to press reports, September 30 is set as the observance of the first-ever International Blasphemy Day. This could be interesting.
The choice of September 30 looks back to that date in the year 2005, when the publication of cartoons depicting the prophet Muhammad’s face sparked outcry and protests in the Muslim world and threats toward the West.
Now, as Religion News Service reports, the Center for Inquiry is planning a day of observances to mark the occasion. Ron Lindsay, a lawyer who serves as president of the Council for Inquiry International, said that the day was part of the group’s effort to expose religious beliefs to investigation. In the words of the RNS report, the goal is “to expose all religious beliefs to the same level of inquiry, discussion and criticism to which other areas of intellectual interest are subjected.”
Posted by Chad Selph's Blog at 6:00 PM 1 comment:

The Definition of Success

Success can be hard to measure and maintain. I like this article from Mark Batterson in giving some simple, profound definition to succes: "Thought I'd share a few of my personal definitions of success. It's important to define success in biblical and personal ways. You need to know what you're aiming at or you will succeed at the wrong thing..."
Posted by Chad Selph's Blog at 9:11 AM 1 comment: 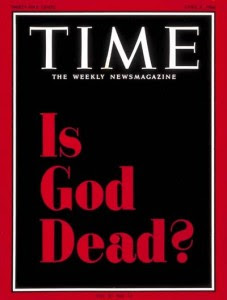 In light of our current sermon series on apologetics, Al Mohler's article is appropriate for this week. He writes, "John T. Elson's most famous article for TIME magazine appeared over 40 years ago, and it largely defined his journalistic career. His April 8, 1966 cover story, "Is God Dead?," became an icon of the rebellious and increasingly secular sixties..."
I enjoyed, years ago, getting to hear S.M. Lockridge address this issue. S. M. Lockridge, who preached in San Diego from 1953 to 1993, challenged the “God is dead” philosophy by saying, “Well, if God is dead, who assassinated him? What coroner was called? Who signed his death certificate? Who was so well-acquainted with the One pronounced dead that he could identify the deceased? In what obituary column did you find his name? And why wasn’t I notified? I’m one of the next of kin!”
Posted by Chad Selph's Blog at 8:55 AM 2 comments:

Interesting article regarding a comparison of the Hall of Fame acceptance speeches of Michael Jordan and David Robinson from Voddie Baucham's blog: "There was a stark difference between the two acceptance speeches. As I listened to the two speeches, all I could think of was the old commercial catchphrase, "Like Mike... If I could be like Mike." Unfortunately, in this instance, Mike was the last person anyone should aspire to be like. This was definitely not a Michael Jordan highlight. Jordan's Speech was self-centered, indulgent, arrogant, and at times embarrassing. In contrast, David Robinson rose to the occasion and made a brief, inspiring, encouraging speech (see his speech here) that made his family, his team, and his friends proud. "
Posted by Chad Selph's Blog at 8:10 AM No comments: 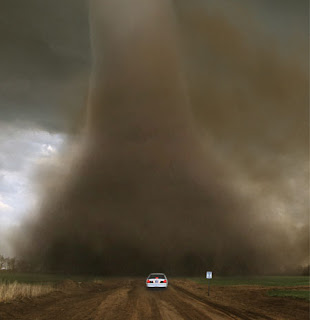 I ran across a set of photos taken by storm chaser, Jim Reed. The photo that accompanies this article is one example from the set. Like a great work of art, I pondered what this image said to me today. My first thought took me to the Bible verse that says, "Be still, and know that I am God" (Psalm 46:10, NIV). Of course, the companion thought to that verse is, "He is God and I am not." I'm sure the officer in his patrol car felt a bit of that when he found himself facing off with the storm.
My second thought drew me to the verse that says, "The heavens declare the glory of God; the skies proclaim the work of his hands." (Psalm 19:1, NIV). God's power and majesty are on display through His creations - "the Bible of His handiwork" - as one professor of mine put it.
The third thing to come to mind was the hymn God Leads Us Along. Bill Dagle wrote the background story of the hymn which adds further richness to it's meaning. He wrote, "It’s a fact of life that bad things do happen to good people. The challenge is to find the Lord, through the experience, and where He might be leading. Many times, our stubbornness and pride block the leading of the Lord in our lives. A crisis has a way of redirecting our steps, reorganizing our priorities, and giving us the opportunity to pave the road of life with lessons that might guide others who follow. Many hymns that we enjoy today were born out of the sorrows of yesterday.
In 1903, a song was published by preacher George Young entitled, God Leads Us Along. In the chorus, Pastor Young revealed the catalyst for the writing of the song when he wrote these words, "Some thru the waters, some thru the flood, some thru the fire, but all thru the blood, some thru great sorrow, but God gives a song, in the night season and all the day long."
After many years of sacrifice, this country preacher and his wife had saved enough money to build a home of their own. Pastor Young was handy with a hammer as well as with a Bible so, in short time, a new home was completed. The many years of low pay and thankless hours would be but faint memories now. A dream that often seemed impossible had come true. The Young’s loved their new home, but loved the Lord all the more; and because of this, they continued their ministry of traveling and sharing the good news. It was during one of these trips that disaster struck. Someone, not in favor of Pastor Young’s ministry, set fire to the family’s home while they were away. When George returned, he found a pile of ashes. All his earthly possessions were now gone. Then Pastor Young remembered the priceless things that fire cannot destroy. In his suffering, he could see God’s leading and a greater appreciation of what really counts.
A bad thing had happened to a good person because of someone else’s sin. Like Job, this was an attack of Satan. Yet God was still leading, leading Pastor Young to write a song that has comforted untold thousands for over 100 years:
Tho sorrows befall us and Satan oppose
God leads His dear children along.
Thru grace we can conquer, defeat all our foes
God leads His dear children along."
My final thought on the photo was fairly simple - God says, "Don't go this way. Back up." God is always speaking and sometimes with great clarity and authority. Listen always for God...whether in the storm or in the "still, small voice."
Posted by Chad Selph's Blog at 9:38 AM No comments: 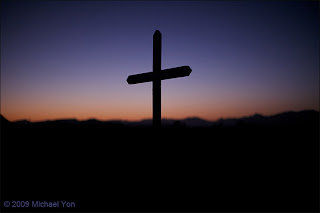 Michael Yon posts an interesting photo essay of the war in Afghanistan, eight years after 9/11.
Posted by Chad Selph's Blog at 7:54 AM No comments: 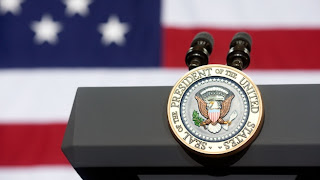 The controversy over President Barack Obama’s speech to America’s school children continues to incite controversy. On the surface, this seems incredible. Why would a speech calling for students to remain in school and set personal goals for themselves incite any controversy at all? Is this just another eruption of the Culture [...]
Dr. Al Mohler comes through with a level-headed explanation of why there is so much controversy surrounding President Obama's speech to the students of America.
Posted by Chad Selph's Blog at 7:35 AM No comments: